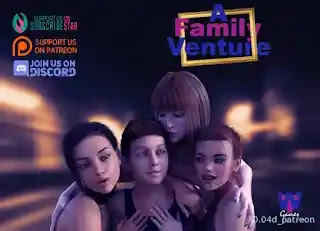 Tony owes a huge amount of money to the Mafia, but when he ends up in prison, 3the responsibility of the debt falls to his only son, the mc, Ryan. Help Ryan develop his relationship with his mother and two sisters. With his father gone, there is nothing stopping the development of his Oedipal complex. And don’t forget the weekly payments to the mafia, because if they don’t receive their money, they will still take what they are owed in other ways.

v0.02
216 new images
33 new events/scenes (including an introduction to a new source of income).
New inventory system
New phone interface that includes completed events, stats, date, time.
Photo Gallery to replay scenes from the game
Special $5 and up Patreon photo gallery.
v0.02b
Several game breaking bug fixes.
various small bug fixes New skip time button on cell phone
Note: time-skip button doesn’t work until the intro events of the game have all taken place.
If your button doesn’t work, you haven’t finished the intro.
v0.03b
294 new images
2,371 lines of dialogue
11 New events
New character 2 commission pieces from N7, a moderator at F95, and Frayed 80, a member of our “Family with Benefits” tier.
Note: Hint system works mostly, but is acting a bit funny, I’m not going to invest any of my time fixing it due to requests to change the hint system to be on the phone interface.
I will add a bugfix file in the next couple days that will make this change, and fix any other bugs we may find.
v0.04c
Various bug fixes New navigation system
New Hint system (No longer in the portrait, now it’s found on the phone)
268 new images 3,379 lines of dialogue
24 new events
New character 2 commission pieces in the supporters gallery
v0.04d
A butt load of bug-fixes A new Halloween Picture in the supporters gallery.