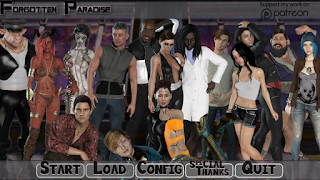 You play as a happily married man with 2 wonderful (stepdaughters?). Everything was going okay in your life, until one day you heard about a paid social trip to space.
You decided to try your luck and participate with your whole family. Making it through the end will reward you with a good sum of money that will help with your mortgage and most importantly, get your stepdaughters through college. And to your surprise you got picked and not only you, but your whole family. On the day you’re supposed to leave, you meet a strange man who tells you you’re being used as a guinea pig for a test experiment on a serum that wipes out memories. He gives you a pill that will negate that effect. Although you are too late to warn your family you can at least watch over them or take advantage of the fact they have no memories of you or their siblings? The choice will be yours.​

Bug fixes:
TOUCH SCREEN USAGE
swipe down to hide the ui
swipe right to start skipping of text
longpress the save file thumbnail in the save/load screen to delete this slot