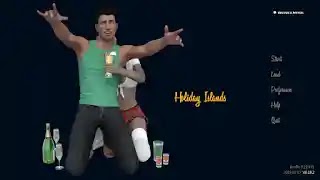 The story is about a young guy who just finished college. He celebrates this at a party. Then he wakes up in the middle of nowhere. He cannot remember what happened. He has a complete blackout! Did he drink to much? How did he end up so far away from home?

In this early version you will be able to play through the introduction.
Dataminers: please be so fair and don’t post story spoiler when you dig around in my files. The game uses overlays a lot and CG-art therefore cannot be ripped like in other games.​

V9
is a major update and REQUIRES to start a new game, old savegames are all incompatible, this will be the base-version for a while followed by smaller and faster updates main story introduces the last main-character on day 10+

➤offered by Jennifer in the boutique
➤requires pre-quest “Smile please” to unlock
➤unlocks photo beach
➤3 photo-outfits available: Emily, Sara, Scarlett
➤allows one daily photo-shooting per day from 10:00 (boutique opens to pick outfit) to 19:00 (20:00 sunset on photo beach) restaurant job:
➤to unlock it the player must talk to Emily when she is in the restaurant kitchen, also dirty dishes must be cleaned before to make some room on the kitchen table

Pamela: it’s no longer required to talk to her on the beach to see her in the massage studio
Meagan/Emily: day 6+ added moneytalk scene, unlocks the ladder in the livingroom, notification for daily payment and sympathy changes (blue book is not in the game yet and the computer is not usable) character images added to sympathy quests to make savegames more compatible during development the questlog now supports adding and updating quests over multiple game-versions, internally each quest has its own version, if an old quest-version gets detected the quest will be replaced and reset, quest-versions are visible in the lower right corner of the questlog and will all start with “1” in V9

removed all money cheats slightly increased chance to spawn spider events of the main story will now trigger after some ingame time has passed and the mc moved to the right location, Michael K. is no longer triggered by using Meagans phone on the kitchen table temporary disabled credits screen to avoid confusion about the game ending at that point KNOWN BUGS:
Jess and Scarlett are hardcoded to sit forever in the restaurant with an unfinished dialogue while taking photos: vignette is displayed incorrect, should always be between background and UI, H-key/mousewheel not working correctly certain events can break the space time continuum and make characters magically appear in multiple places at once (photoshoots, moneytalk scene near computer at home)

Edited screenshot to show the navigation menu at the bottom in both modes.
replaced map with navigation menu that switches between the local ‘area’ and ‘island’ locations
➤character icons show the location of the main characters

v0.10.2
To install this incremental update, replace scripts.rpa in your