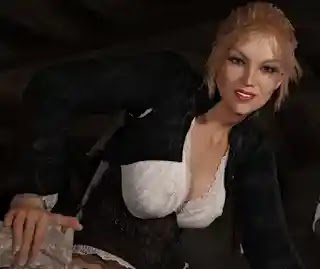 You live a simple life in a small fantasy town. You possess few talents except that of Truthsaying, the ability to magically tell if someone is lying. One day news arrives that the King is dead of old age and that his daughter, Princess Selena, is coming to your town for her coronation. When a person close to you gets murdered soon after, and you learn that you are the only person who can save the world from an unspecified calamity, things get rather heated.

Serving under a powerful sorceress, you are taught the ability to manipulate people’s minds.
With this knowledge in hand and a potty-mouthed pixie in tow, you are told to prepare for the arrival of the Princess so that you can seduce her and save the world (the details of this elude you). Until then, however, you must practice. How appealing, then, that this practice means using your magic to seduce as many of the town’s girls as possible. Life is about to become… satisfying.

v0.14
Perversity now goes up to level 5.
Expanded Evelyn’s night scene to support Perversity 5.
Expanded Primrose’s night scene to support Perversity 5.
Implemented the quest to find a Skeleton Key for the Knock spell.
Replaced the map icon with a far more intuitive one made by Augustus Commodus.
Various tweaks and fixes.
v0.16
Implemented Callie’s night scene up to and including Perversity 5 and Agility 5.
Further expanded Callie’s fashion show with new options and rewards that will influence the type of relationship you can have with her in the future.
There is now a new way to obtain Callie’s.
Added a new scene to the gallery. he
Various tweaks and fixes.
v0.17.0
You can now spend time with Nell to improve your relationship with her. ou
Expanded church tower content.
Added Advanced Training.
Three new scenes with Nell added to the Gallery.
Agility training now goes up to level 6.
Charisma training now goes up to level 4.
Various tweaks and fixes.
v0.18.0:
You can now train with the Crone so that you can reveal a person’s dark secrets.
Town travel system replaced with a town map.
Significant development added to one potential relationship.
New scene added to the gallery.
Rejecting Nell now awards a point of Charisma.
This also applies retroactively to existing saves.
Touched up many outdated transitions in the early parts of the game.
Various tweaks and fixes.
v0.19.0:
Implemented Evelyn’s dark secret.
Two new repeatable scenes with Evelyn.
Two additional repeatable scenes for when you spend time with Evelyn. he
Expanded Remove Inhibitions for Evelyn.
Expanded Evelyn’s night scene with alternate renders for new wardrobe state.
Charisma training now goes up to level 5.
Added a new category to the Gallery.
Moved one existing scene to this new category.
Increased the requirements for Evelyn to make a final decision about her relationship with the MC.
Major overhaul of the way Evelyn’s renders are selected behind the scenes, improving many transitions and making it easier to add new poses.
Added variation images for when Evelyn speaks, making conversations with her work the same as with the other girls.
All existing conversations with Evelyn in the home location updated to use the new visuals.
Like with Nell, rejecting Primrose now awards a point of Charisma.
This is retroactive.
You will still receive Charisma for accepting their advances.
Standardized the location menus across the game.
Options will now be shown in this order: Spells, actions, everything else, destinations, leave.
Please let me know if you find any exceptions to this.
Added menu shortcuts to the map in the two locations where you are most likely to use it. Various tweaks and fixes.
v0.20.0:
You may now revisit the Fey Court.
Multiple new scenes with the Fairy Queen.
New scene with the Leanan Sídhe.
Completely revamped visuals and animation for the interrogation scene with Samarra and Nell.
One new musical track Experimental: Map is shown automatically when you visit the streets in town while no other events are occurring.
The map is now dimmed during nighttime.
Primrose’s menu didn’t show if you missed one of her optional scenes.
It should now be visible if you’ve had with her at all.
Removed references to non-existing face animation for Evelyn that caused issues for Android users.
Various tweaks and fixes.
v0.21
Various tweaks and fixes.
v0.22
v0.23:
Updated to the latest version of Ren’py.
If you run into any issues because of this, please let me know.
You may once again visit the Leanan Sídhe for “romance.”
The writing room at the library is now open for business.
Expanded an existing scene considerably with several different variations.
Slightly expanded remove inhibitions content for a certain character.
Hovering over a locked scene in the gallery will now provide a hint for how to unlock it.
Added a new musical track.
Livened up the intro with some more music.
Evelyn will no longer show up at the training grounds if she has left town.
Various tweaks and fixes
v0.24
Added a new scene with Callie.
Expanded Callie’s scene.
Courage training now goes up to level 4.
Transition text will now stay on the screen until you click to advance.
Various tweaks and fixes
v0.24.1:
Fixed a trigger that could cause Callie’s new events from this update to happen too early and mess up progression.
v0.25
You may now attempt to interpret the Fairy Queen’s visions.
Charisma training now goes up to level 6.
Added a new scene with Samarra.
Added a new training scene with the Fairy Queen.
Samarra will now tell you her whole story if you are worthy of it.
Improved animation, lighting, and hair color in Samarra’s first scene.
It is now possible to search Samarra’s tent.
Added a new musical track: Samarra’s Theme.
Various tweaks and fixes
TOUCH SCREEN USAGE
swipe down to hide the ui
swipe right to start skipping of text
swipe left&right to open the game menu
longpress the save file thumbnail in the save/load screen to delete this slot